I won’t cover ECG editing techniques much here, as this has been discussed in depth in previous posts. What is important to note from those posts is that for Impedance Cardiography, only mark normal R peaks with good corresponding dZ/dt cycles. This is different than editing ECG for Heart Rate Variability, where a contiguous R peak series is needed.

If this peak was left marked, it would be used to build the Ensemble Average. But it is clearly not actually an R peak, so the first thing to do would be to delete this peak.

Now we can see something that looks like an abnormal R peak. If we were to mark this peak, it would corrupt the Ensemble Average by including an ECG cycle that does not match the expected signal morphology for the segment. Additionally, there is no dZ/dt response following the pattern of previous beats. In this case, no peak should be inserted.

If this data were edited for HRV, you may see an Absolute Midbeat placed between the two normal beats to maintain timing.

This type of edit is not valid for impedance cardiography, for the same reasons as above – corruption of the Ensemble Average by including data that does not depict a normal cardiac cycle.

If we left this peak marked, it would corrupt the Ensemble Average by including an ECG cycle that does not match the expected signal morphology for the segment. Additionally, there is no dZ/dt response following the pattern of previous beats. In this case, we should delete this peak.

If this data were edited for HRV, you may see an Absolute Midbeat placed between the two normal beats to maintain timing.

This is not a valid edit for impedance analysis, but if you are re-using edits from HRV (or planning on using these edits in HRV) it is OK to leave this estimated peak as long as Ignore Estimated Beats was enabled on the Setup screen.

Once the ECG signal has been edited and we know the data being used to build the Ensemble Average is correct, it is time to examine the Ensemble Average itself. The algorithms used to detect landmarks on the ECG and dZ/dt signals are not perfect – this is especially the case when the known characteristics for a given landmark are not present in the signal morphology due to noise or recording technique.

In the data file depicted below, the B point notch is visible in all segments so the Max Slope Change method for B Point Calculation was used. In this particular segment, the B point was not identified properly:

Since the B point was not placed properly in this instance, we should correct the B point placement using the Ensemble Editor.

The Ensemble Editor allows you to move the points on the Ensemble Average to their correct locations in the event that they aren’t placed there automatically by the calculation algorithms. To launch the Ensemble Editor, press the light blue button near the top of the screen

Once launched, the editor contains the Ensemble Average along with the location and amplitude of each of the landmarks

Ensure that the Crosshair tool is selected and click and drag any of the vertical lines to move the points to the desired locations. In this case, we want to drag the green B point to the left so that it rests in the notch

This can be done for any of the points that you feel have not been placed properly. If you need to start over, you can either reset the cursors using the lever to the right of the graph or press Cancel.

If you are satisfied with the changes, press OK to return to the IMP Analysis screen.

If you are working with a data set where the B points are visible, you should be using the Max Slope or Max Slope Change B Point Calculation methods. In this situation, if a B point is not placed exactly right, you should use the Ensemble Editor to adjust its location.

If your data set does not have a clear B point visible, you have no choice but to estimate using Percent dZ/dt or Percent dZ/dt + C. Since there is no visible B point, you would never adjust the B point location.

If your data set is somewhere in the middle, where some segments show the B point and some do not, it is actually best to estimate your B point location using one of the recommended methods. You can use the segments where B is visible to better inform what constant offset is used in the Percent dZ/dt + C method. Take the screenshot from above, and assume that B is being estimated

You can use the Ensemble editor to determine the offset between the estimated location and the actual location. Using this known discrepancy, you can raise/lower your constant offset or adjust the percentage in the B Point Calculation method to better estimate the B point location on segments where it isn’t visible.

There are two edit files stored by the IMP application – .edi and _ensemble.edt.

When selecting an edit file to use you will always choose the .edi file. If there are ensemble edits they will automatically be loaded from the corresponding _ensemble.edt file.

The edit file stored by the IMP application has a .edi2 file extension. This is the file you will select when specifying an edit file to use. 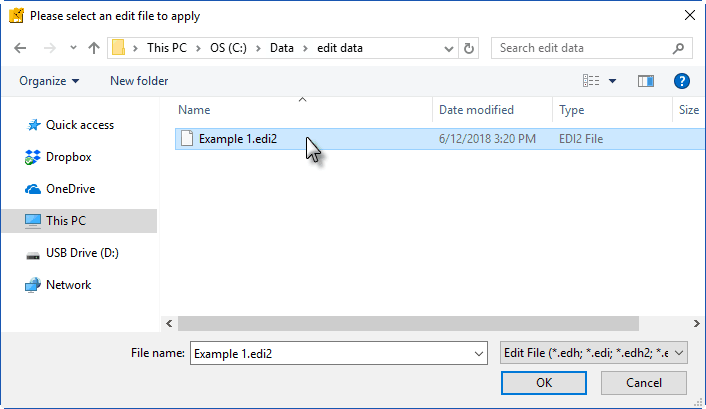 Next time we will wrap up our discussion on cardiac impedance by discussing how the signals can be used to derive respiration.