First, connect your Noldus Trigger cable to your MindWare data acquisition hardware and the computer running The Observer XT.

We will start by configuring BioLab to start on a Trigger sent from Observer and capture the TCAP signal for future synchronization. Then we will set up Noldus Observer to send the TCAP signal when an observation begins. Finally, we will perform a triggered acquisition.

Launch BioLab and proceed to the Configuration screen.

Change the Trigger Mode to Rising which allows BioLab to start on an external rising pulse trigger. 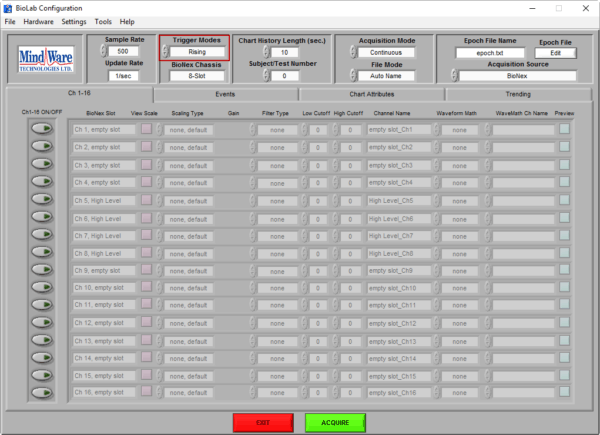 Now enable the input being used to capture the TCAP signal from Observer. On a BioNex this will be the channel on a High Level module which has the Noldus trigger cable plugged into it. 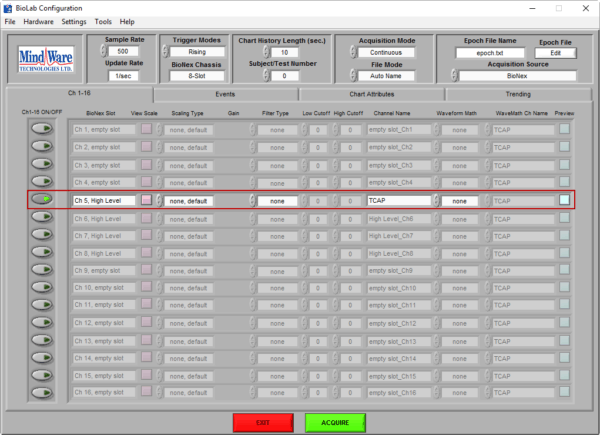 When using a Wireless Data Center, you should enable the Analog Input channel which shows up first on the Ch 1-16 tab. 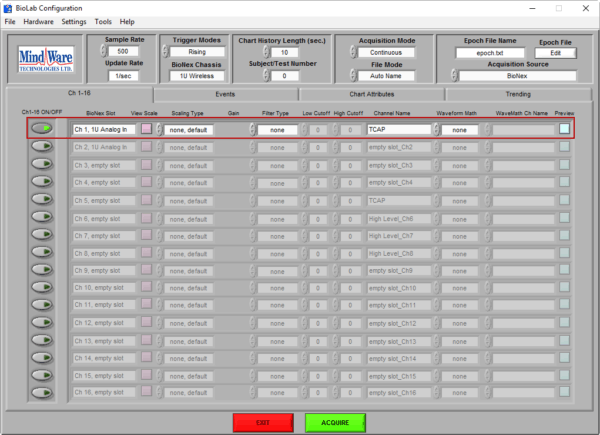 It is also a good idea to change the Channel Name to reflect that the channel contains the TCAP signal.

Note: You need to be in either BioNex or BioNex & Ambulatory WiFi mode to acquire the TCAP.

While you are in BioLab, make note of the Sample Rate for use when configuring The Observer XT. 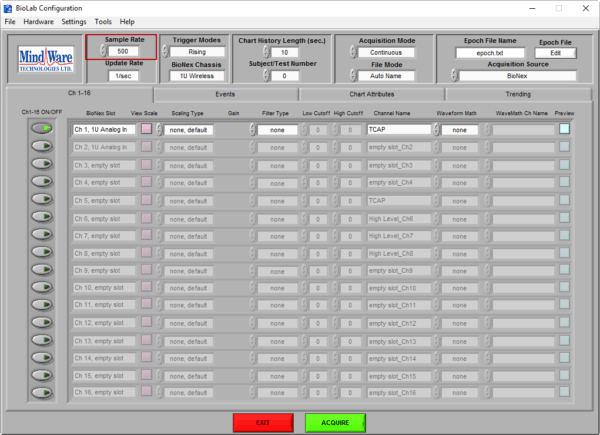 To configure Noldus Observer to send the TCAP signal, launch The Observer XT and create a new observation. 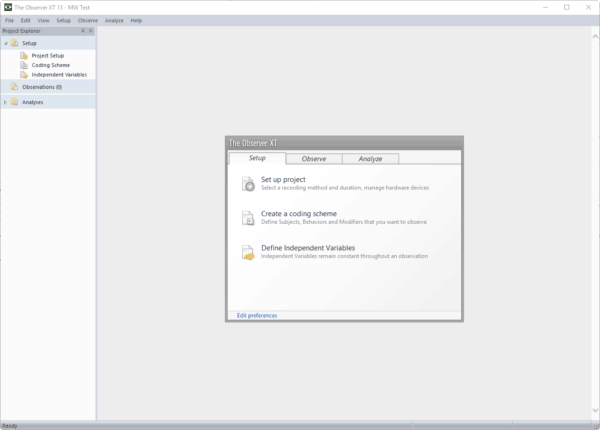 Press Set up Project to proceed to the Project Setup screen. 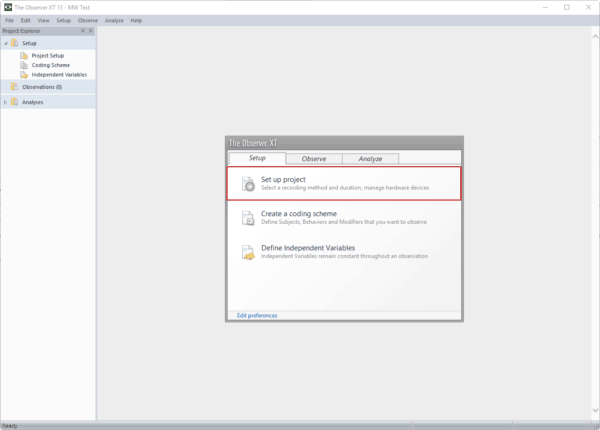 Change the Observation source to a Live Observation, and press Devices to launch the Devices window. 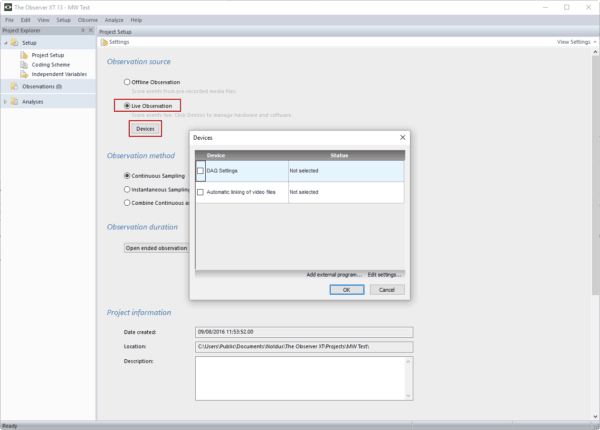 On the Device screen, select the DAQ Settings device to open the DAQ Hardware Settings window.

Under the Output Device section, select the serial port which has the Noldus Trigger cable attached to it. Ensure that Status reads Online. 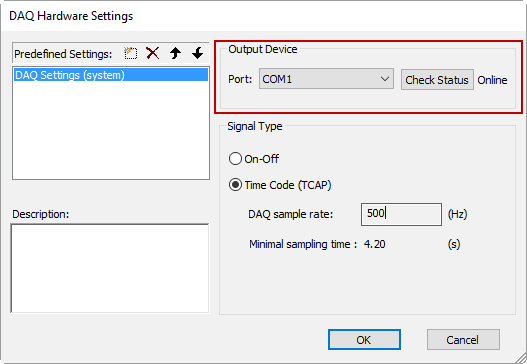 Under the Signal Type section, enable the Time Code (TCAP) option and ensure that the DAQ sample rate is less than or equal to the sample rate specified in BioLab. 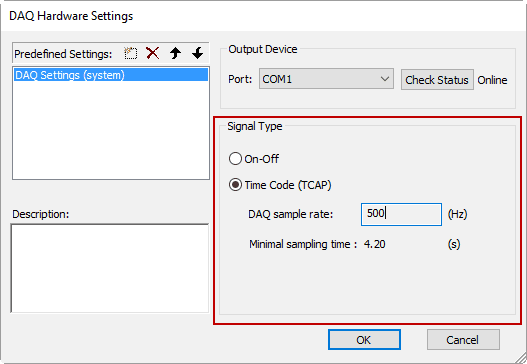 Press OK, to complete configuring your project to trigger BioLab.

Once BioLab and The Observer XT have been configured, proceed to the Acquisition screen in BioLab by pressing the green Acquire button. 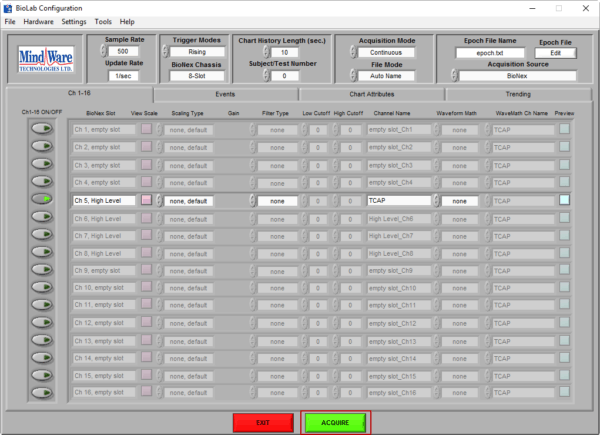 On the Acquisition screen, after specifying a file path, the Start/Stop button will appear grayed out. BioLab is now awaiting a trigger to start acquisition. 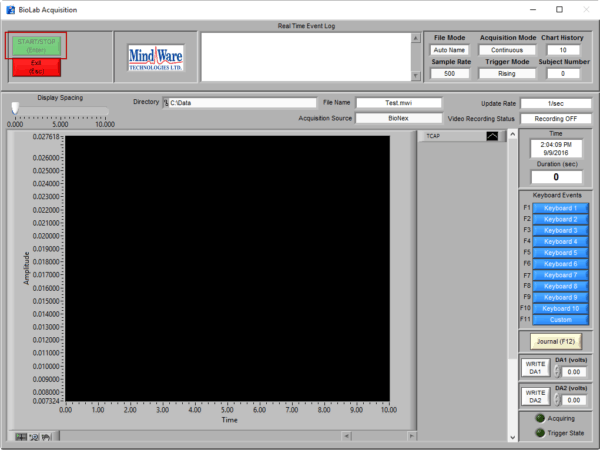 Next, in The Observer XT, start a new observation. When the observation starts, the Start/Stop button will no longer be grayed out, the green Acquiring LED will be on, and the TCAP signal should be visible on the TCAP channel. 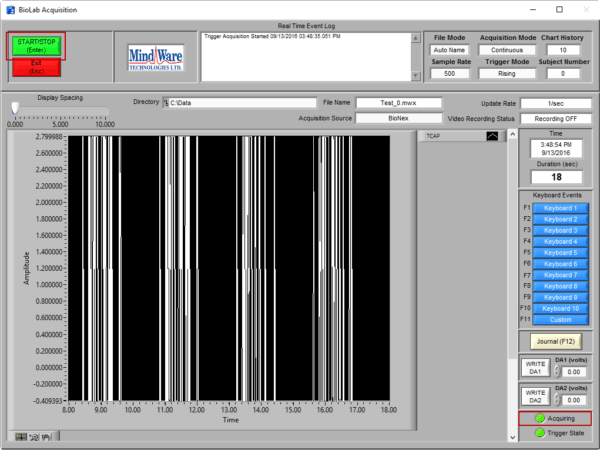 When you are finished acquiring, BioLab and The Observer XT can be stopped individually.